Windows 10 October 2018 Update has been released to public which is the 6th major update released for Windows 10 operating system. It is also referred as RedStone 5. The embedded version is called Windows 10 IoT Enterprise 2019.

Windows 10 IoT Enterprise is a full version of Windows 10 that delivers enterprise manageability and security to IoT solutions. It is a binary equivalent to Windows 10 Enterprise, so you can use the same familiar development and management tools as client PCs and laptops. However, when it comes to licensing and distribution, the desktop version and IoT versions differ.

Note that Windows 10 IoT Enterprise offers both Long-term Servicing Channel (LTSC) and Semi-Annual Channel (SAC) options. OEMs can choose the version they require for their devices. More information can be found at https://docs.microsoft.com/en-us/windows-hardware/manufacture/desktop/iot-ent-overview

Changes in the pricing model
Up until now, pricing has been based vertically. Now it is based on the type/performance of processors.

Subject to change – please contact microsoft@avnet.eu for the actual CPU to license matching

The license prices vary depending on the type of processor you are using.

We are happy to send you an offer, based on your specific need and/or Tier level.

From the technical standpoint, there is no difference in between the 3 license options. It´s the same installation media without any feature restriction.


There are two update models available, covered under the following licensing options:

Twice a year the OS will receive feature updates and regularly security and other updates. The feature updates in March and September (1803 and 1809 indicate the versioning) can change the OS up to a complete new OS version.

There is no Microsoft Store, Cortana and Edge browser in this version. So the updates can be controlled and there is no must to install them. 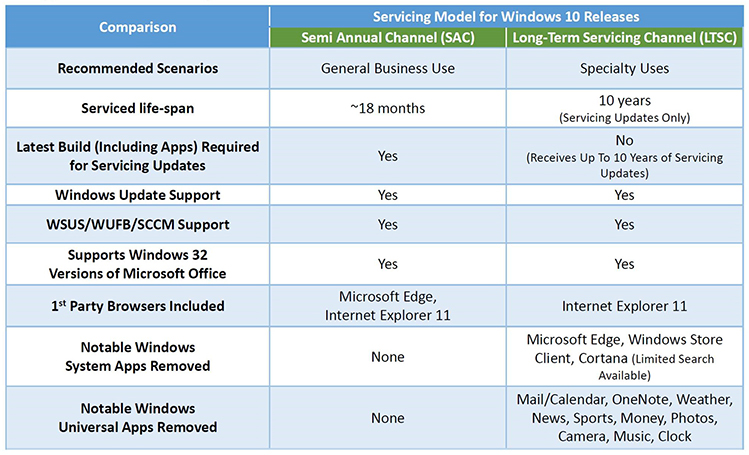 Windows 10 Enterprise LTSC 2019 builds on Windows 10 Pro, version 1809 adding premium features designed to address the needs of large and mid-size organizations), such as:

The Windows 10 Enterprise LTSC 2019 release is an important release for LTSC users because it includes the cumulative enhancements provided in Windows 10 versions 1703, 1709, 1803, and 1809. Details about these enhancements are provided at https://docs.microsoft.com/en-us/windows/whats-new/ltsc/whats-new-windows-10-2019

The details for the Windows 10 IoT Enterprise 2019 SAC version can be found at https://docs.microsoft.com/en-us/windows/whats-new/whats-new-windows-10-version-1809

Availability and end of service dates

Note: Not all features in an update will work on all devices. A device may not be able to receive updates if the device hardware is incompatible, lacks current drivers, or is otherwise outside the original equipment manufacturer’s (OEM) support period.