The Windows 10 operating system introduces a new way to build, deploy, and service Windows: Windows as a service. Microsoft has reimagined each part of the process, to simplify the lives of IT pros and maintain a consistent Windows 10 experience for its customers. These improvements focus on maximizing customer involvement in Windows development, simplifying the deployment and servicing of Windows client computers, and leveling out the resources needed to deploy and maintain Windows over time.

Watch the following Microsoft Mechanics video for an overview of the release model, particularly the Semi-Annual Channel. 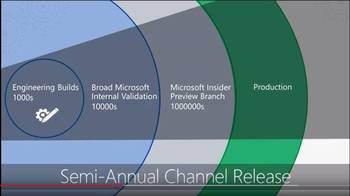 Prior to Windows 10, Microsoft released new versions of Windows every few years. This traditional deployment schedule imposed a training burden on users because the feature revisions were often significant. That schedule also meant waiting long periods without new features — a scenario that doesn’t work in today’s rapidly changing world, a world in which new security, management, and deployment capabilities are necessary to address challenges. Windows as a service will deliver smaller feature updates two times per year, around March and September, to help address these issues.

In the past, when Microsoft developed new versions of Windows, it typically released technical previews near the end of the process, when Windows was nearly ready to ship. With Windows 10, new features will be delivered to the Windows Insider community as soon as possible — during the development cycle, through a process called flighting — so that organizations can see exactly what Microsoft is developing and start their testing as soon as possible.

Microsoft also depends on receiving feedback from organizations throughout the development process so that it can make adjustments as quickly as possible rather than waiting until after release. For more information about the Windows Insider Program and how to sign up, see the section Windows Insider.

Of course Microsoft also performs extensive internal testing, with engineering teams installing new builds daily, and larger groups of employees installing builds frequently, all before those builds are ever released to the Windows Insider Program.

Application compatibility testing has historically been a burden when approaching a Windows deployment or upgrade. With Windows 10, application compatibility from the perspective of desktop applications, websites, and apps built on the Universal Windows Platform (UWP) has improved tremendously. Microsoft understands the challenges organizations experienced when they migrated from the Windows XP operating system to Windows 7 and has been working to make Windows 10 upgrades a much better experience.

If it’s unclear whether an application is compatible with Windows 10, IT pros can check the supported software directory at www.readyforwindows.com.

Note: For additional information, see the section about Servicing Channels.
You can also read this blog post, with details on this change.

With Windows 10, Microsoft will package new features into feature updates that can be deployed using existing management tools. Because feature updates are delivered more frequently than with previous Windows releases — twice per year, around March and September, rather than every 3–5 years — changes will be in bite-sized chunks rather than all at once and end user readiness time much shorter.

Monthly updates in previous Windows versions were often overwhelming because of the sheer number of updates available each month. Many organizations selectively chose which updates they wanted to install and which they didn’t, and this created countless scenarios in which organizations deployed essential security updates but picked only a subset of non-security fixes.

In Windows 10, rather than receiving several updates each month and trying to figure out which the organization needs, which ultimately causes platform fragmentation, administrators will see one cumulative monthly update that supersedes the previous month’s update, containing both security and non-security fixes. This approach makes patching simpler and ensures that customers’ devices are more closely aligned with the testing done at Microsoft, reducing unexpected issues resulting from patching. The left side of Figure 1 provides an example of Windows 7 devices in an enterprise and what their current patch level might look like. On the right is what Microsoft’s test environment PCs contain. This drastic difference is the basis for many compatibility issues and system anomalies related to Windows updates. 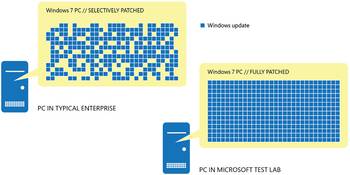 To align with the new method of delivering feature updates and quality updates in Windows 10, Microsoft introduced the concept of servicing channels to allow customers to designate how frequently their individual devices are updated. For example, an organization may have test devices that the IT department can update with new features as soon as possible, and then specialized devices that require a longer feature update cycle to ensure continuity.

With that in mind, Windows 10 offers 3 servicing channels. The Windows Insider Program provides organizations with the opportunity to test and provide feedback on features that will be shipped in the next feature update. The Semi-Annual Channel provides new functionality with twice-per-year feature update releases. Organizations can choose when to deploy updates from the Semi-Annual Channel. The Long Term Servicing Channel, which is designed to be used only for specialized devices (which typically don't run Office) such as those that control medical equipment or ATM machines, receives new feature releases every two to three years. For details about the versions in each servicing channel, see Windows 10 release information.

The concept of servicing channels is new, but organizations can use the same management tools they used to manage updates and upgrades in previous versions of Windows. For more information about the servicing tool options for Windows 10 and their capabilities, see Servicing tools.

When Microsoft officially releases a feature update for Windows 10, it is made available to any PC not configured to defer feature updates so that those devices can immediately install it. Organizations that use Windows Server Update Services (WSUS), Microsoft System Center Configuration Manager, or Windows Update for Business, however, can defer feature updates to selective devices by withholding their approval and deployment. In this scenario, the content available for the Semi-Annual Channel will be available but not necessarily immediately mandatory, depending on the policy of the management system. For more details about Windows 10 servicing tools, see Servicing tools.

Organizations are expected to initiate targeted deployment on Semi-Annual Channel releases, while after about 4 months, we will announce broad deployment readiness, indicating that Microsoft, independent software vendors (ISVs), partners, and customers believe that the release is ready for broad deployment. Each feature update release will be supported and updated for 18 months from the time of its release.

Note:
Organizations can electively delay feature updates into as many phases as they wish by using one of the servicing tools mentioned in the section Servicing tools.

Specialized systems—such as PCs that control medical equipment, point-of-sale systems, and ATMs—often require a longer servicing option because of their purpose. These devices typically perform a single important task and don’t need feature updates as frequently as other devices in the organization. It’s more important that these devices be kept as stable and secure as possible than up to date with user interface changes. The LTSC servicing model prevents Windows 10 Enterprise LTSB devices from receiving the usual feature updates and provides only quality updates to ensure that device security stays up to date. With this in mind, quality updates are still immediately available to Windows 10 Enterprise LTSB clients, but customers can choose to defer them by using one of the servicing tools mentioned in the section Servicing tools.

Long-term Servicing channel is not intended for deployment on most or all the PCs in an organization; it should be used only for special-purpose devices. As a general guideline, a PC with Microsoft Office installed is a general-purpose device, typically used by an information worker, and therefore it is better suited for the Semi-Annual servicing channel.

Microsoft never publishes feature updates through Windows Update on devices that run Windows 10 Enterprise LTSB. Instead, it typically offers new LTSC releases every 2–3 years, and organizations can choose to install them as in-place upgrades or even skip releases over a 10-year life cycle.

Note:
Windows 10 LTSB will support the currently released silicon at the time of release of the LTSB. As future silicon generations are released, support will be created through future Windows 10 LTSB releases that customers can deploy for those systems. For more information, see Supporting the latest processor and chipsets on Windows in Lifecycle support policy FAQ - Windows Products.

For many IT pros, gaining visibility into feature updates early—before they’re available to the Semi-Annual Channel — can be both intriguing and valuable for future end user communications as well as provide the means to test for any issues on the next Semi-Annual Channel release. With Windows 10, feature flighting enables Windows Insiders to consume and deploy preproduction code to their test machines, gaining early visibility into the next build. Testing the early builds of Windows 10 helps both Microsoft and its customers because they have the opportunity to discover possible issues before the update is ever publicly available and can report it to Microsoft.

The Windows Insider Program isn’t intended to replace Semi-Annual Channel deployments in an organization. Rather, it provides IT pros and other interested parties with pre-release Windows builds that they can test and ultimately provide feedback on to Microsoft.

There are many tools with which IT pros can service Windows as a service. Each option has its pros and cons, ranging from capabilities and control to simplicity and low administrative requirements. The following are examples of the servicing tools available to manage Windows as a service updates:

With all these options, which an organization chooses depends on the resources, staff, and expertise its IT organization already has. For example, if IT already uses System Center Configuration Manager to manage Windows updates, it can continue to use it. Similarly, if IT is using WSUS, it can continue to use that. For a consolidated look at the benefits of each tool, see Table 1.

Note:
Due to naming changes, older terms like CB,CBB and LTSB may still be displayed in some of our products.